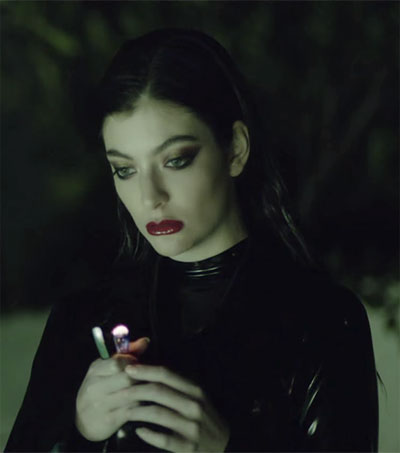 Lorde One of Stardom’s Vengeful

Lorde joins the ranks of pop singers joyfully and brutally sidestepping tropes about victimhood in the music video for Disclosure’s “Magnets” which ends with the featured New Zealander tying a guy to a chair, pushing that chair into a swimming pool, and then lighting the pool on fire, the Atlantic reports.

The recent boomlet of murderess music videos doesn’t represent a totally new phenomenon, though. The stars of Dixie Chicks’s “Goodbye Earl” offed an abusive husband in 1999, Ashanti grimly pondered stabbing an adulterer in 2008’s “The Way That I Love You”, and at least three Lady Gaga shorts – “Paparazzi,” “Bad Romance,” and “Telephone” – feature the poisoning or burning of men. But often, these videos fall into two categories: ones that take place in total fantasy worlds – think Kesha mounting James Van Der Beek’s head on her wall after he hunted one too many unicorns, or Britney Spears as a sci-fi assassin/flight attendant – or ones where the killer’s desperation is so abject that it feels like a Very Special Episode.

Few of the recent crop of such videos quite fit into those categories, though. Justice often is less the point than the thrill and spectacle of violence, just as is usually the case in Hollywood action films and popular video games. In “Magnets,” Lorde isn’t dating the “douchey boyfriend,” nor is she the one being abused by him; she kills the guy on another girl’s behalf, and – dancing around in her slick leather tunic before ignoring his pleas for mercy – seems to relish the task.