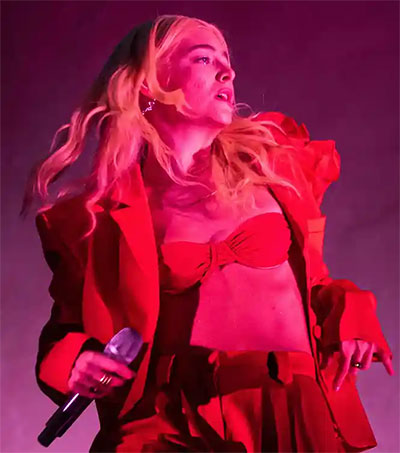 Lorde is Kitty Empire’s ‘Artist of the Week’, The Guardian reviewer deeming the pop singer’s sold-out Alexandra Palace concert a “magnificent night out”.

“By turns tearful and rocking out, the New Zealand star is on a roll with cathartic cuts from her 2021 album Solar Power, including a stirring performance in Māori,” Empire writes.

“Duetting [in London] alongside her countryman and support act Marlon Williams, this is the first time Lorde has performed the track, titled Mata Kohore, live. And it’s just one of a series of shiver-inducing moments in a set replete with emotion.

“The mood is buoyant, with people bawling the songs back to Lorde and pogo-ing en masse to the pummelling, club-adjacent cuts. It’s a magnificent night out, themed visually around her most recent album, but one that contains just a nanosecond or two of disquiet.”