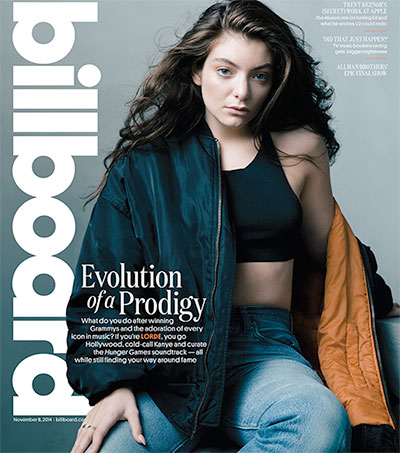 With the Lorde-curated Hunger Games: Mockingjay Part 1 soundtrack coming out on 17 November, the soon-to-be-18-year-old pop singer is proving her taste in collaborators – Kanye West, Chemical Brothers, Miguel and more – are just as cool as her own music, Billboard reports.

Speaking to the magazine for its latest cover story, Lorde talks about everything from cold-calling Kanye to her unexpected friendship with Taylor Swift to ensuring she has a long future in the music industry.

She also shares a few details about her pre-fame years, from breaking into boats with friends to getting pelted with a rotten pear in high school.

“I live in a beach town, and there are these boats that sit on land, and we would break into them,” Lorde says. “We’d sit in them all night, doing Ouija boards and telling secrets. I remember that feeling so vividly, like, ‘We are here. It’s us against everything else.’”