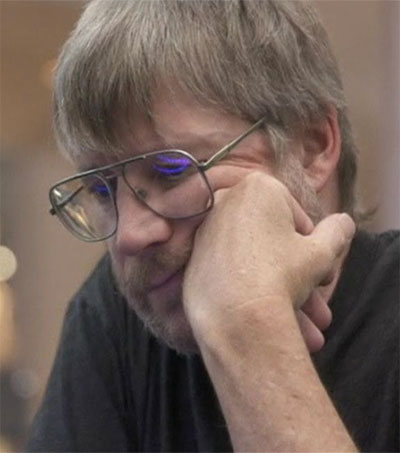 Hunched motionless over the board and calling out his word scores in a voice slightly louder than a whisper was four-time World English Scrabble champion, New Zealander Nigel Richards, 51, in closely-cropped grey hair and a stubble.

The giant, crazy-scientist beard Google search results throw up of him was gone and he wore a slight build and an ink blue t-shirt with a travel pouch strapped to his waist. The rack before him cradled the letters: S-I-G-H-D-I-E and the 18-year-old who sat across him pressed his glasses against the bridge of his nose, rested his elbows on the table and waited with wonderment.

While one may have imagined his mind to rummage through bingo (using all your tiles in a turn) options, Richards quietly spelled out ‘SI’ (Scrabble word finder assures us it’s a valid word which could either mean a metalloid, the metric system or the syllable naming the seventh note of a musical scale).

By the end of the next four moves, Richards’ teenage, Indian-origin opponent from Melbourne, Anand Bharadwaj, smiled, stretched his hand across the table and gushed, “It’s such an honour. Thank you.” The 2011 World Youth Scrabble champion had just lost 365-456. Richards responded to the winning result and the compliment with a smile and a gentle nod. For being notoriously poker-faced, the joke goes that it’s hard to tell if Richards has lost a round or won a hat-trick of world titles.

He is the first-ever English Scrabble player to win the world title more than once and also has two titles in French, a language he doesn’t speak. He is understood to have mastered the French scrabble dictionary or roughly 400,000 words in nine weeks’ time. He also holds a record peak rating (akin to Elo ratings in Chess) of 2298. Richards’ peers will tell you that he’s unrivaled in word knowledge and quick calculation of mathematical probabilities on the board. But for a person with such magnificent mastery over words, Richards famously uses few to communicate. He turns down interview requests with a crack of a smile and walks away.

Long-time friend Charles Carneiro, an Indian scrabble player who lives in Singapore, vouches for Richards’ “fantastic sense of humour” and the distinction of being one of the sport’s quickest thinkers. “Within the first few seconds he’s spotted and decided the word he wants to play, he just uses the rest of the time to just look for better options.”

Arguably the greatest scrabble player on the planet for a while now, Richards is known to be a bit of an ascetic – he lives alone and doesn’t smoke or drink. His latest wish has nothing to do with Scrabble. “He wants to cycle across India,” Carneiro says, “That’s the kind of guy he is – play, win and ride off on his cycle like nothing ever happened.”