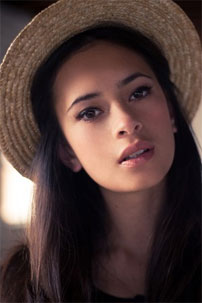 Seventeen-year-old Auckland model Yasmin Bidois was scouted at the mall, the cinema, and then the airport before she gave in to the calling. After doing the modeling circuit in New Zealand, Bidois signed with Ford and jetted to New York. The towering brunette had a modest collections season in February, hitting eight shows in the Big Apple. “When I first came [to New York] it was a bit scary and intimidating. New Zealand seems pretty small compared to a big city like this, but you get use to it. In New Zealand, everyone drives everywhere. And then you come here and no one drives and you have to learn about subways.” Bidois is of Maori (Nga Puhi, Ngati Awa) and French descent.