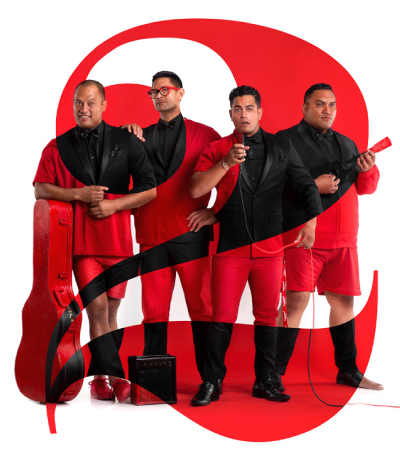 A season of New Zealand theatre is set to hit New York stages next year. Showing at SoHo Playhouse, Wild Dogs Under My Skirt, Modern Māori Quartet: Two Worlds and The Contours of Heaven will feature at the historic theatre between 3 – 30 January 2020. The individual works are produced by FCC/Victor Rodger, Square and Sums Co., and Zanetti Productions respectively.

SoHo’s Artistic Director, Darren Lee Cole, invited the three works to New York after being impressed by their performances during a visit to the Performing Arts Network of New Zealand (PANNZ) Arts Market, held in Auckland in early March 2019. SoHo Playhouse is a critically acclaimed off-Broadway theatre in Manhattan, New York, with a long and proud history of being a platform for international artists.

Darren’s interest was piqued by common concerns born of separate experiences embodied in the performances ­­– experiences which defy borders and cross cultures.
“With its guttural slam poetry style about women finding their voice in their world, Wild Dogs Under My Skirt transported me back to the first time I saw Ntozake Shange’s acclaimed theatre piece, For Colored Girls…, where seven women who have experienced oppression tell their stories,” Darren reflected.

“The Modern Māori Quartet: Two Worlds, through music and captivating storytelling, offers a universal lesson ­– no matter who we are, or where we are, only the truth will set us free. Contours of Heaven invites us into the world of youth at the margins of society all through an incredible soundscape,” he added.

“All three are humanising plays that show how performance art can truly bring the world together,” said Darren.

The season which will be produced by PANNZ, has been strategically timed to coincide with the Association of Performing Arts Professionals (APAP) Market, 10 – 14 January 2020. APAP is one of the largest markets for the performing arts in North America. Adding to the New Zealand presence in New York, performing arts professionals were able to apply to Creative New Zealand’s International Market Development Fund for support to attend the market. In order to leverage from this exposure, Creative New Zealand will support a delegation with an official booth.

Creative New Zealand’s Senior Manager Arts Development, Cath Cardiff said, “We’re delighted that the quality and appeal of New Zealand theatre continues to be recognised internationally. This is a valuable opportunity for these companies to perform at this respected theatre and to attract onward touring opportunities. By attending the market with a larger delegation we will be able to extend the benefits to other New Zealand performing artists,” she added.

“Over the years, we’ve worked hard to develop strategic partnerships at home and abroad which support New Zealand companies to take advantage of such opportunities. It’s wonderful to be able to facilitate and support this collaboration between SoHo and PANNZ and to create new avenues for New Zealand performing artists,” she said.

Louise Gallagher, Executive Director, PANNZ, said, “Darren was invited to attend the PANNZ Arts Market as part of our pilot international programme. This outcome of the Market is hugely validating and shows what we already knew – that there are very real opportunities for New Zealand work to be presented internationally and we’re thrilled to be opening these doors through our showcases. To be able to follow this opportunity through to being the Producer of the New York season feels very rewarding.”

Creative New Zealand has invested NZ$284,000 towards the season of New Zealand theatre at the SoHo Playhouse which is being produced in partnership with PANNZ.