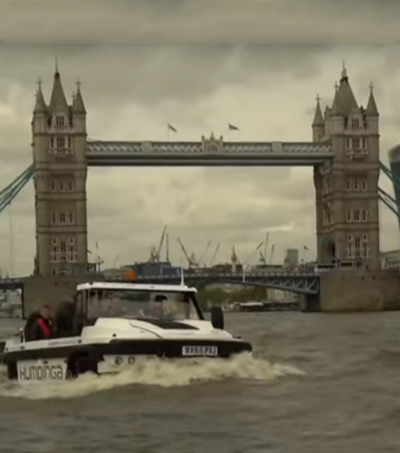 Fancy speeding down the Thames in London to get to your hotel? “Your speedy dream could be about to come true, thanks to Kiwi entrepreneur Alan Gibbs whose amphibious vehicles are being tested this week to take passengers to and from London City Airport,” writes Anne Gibson for The NZ Herald.

Gibbs innovative amphibious vehicles have been making waves now since 2003. This weekend his 4WD, 7m-long commercial vehicle, the Humdinga has been trialled by a five-star London hotel as a new luxury taxi-cab application – dubbed ‘AmphiCab’ – following a demonstration of the amphibious vehicle’s capability on the Thames, according to a statement.

“They’re very keen on the concept of an AmphiCab.  They plan to pick up their guests from London City Airport and literally deliver them to the hotel door via the Thames, then taking them on to business meetings in the City,” said Gibbs.

“It will be a great experience for the guests, faster and much more efficient than by road. The hotel proprietors are really excited, and I’m confident the AmphiCab will be a big success for them.”

The Humdinga has a top speed of around 150 kmh on land and in excess of 50 kmh on water.

Gibbs Humdinga “is currently licenced to a Singaporean Government-owned company, STK, and has found a strong market as a vehicle for flood relief across Asia.”

According to Gibbs “his new breakthrough product is the Biski; a motorbike that can operate at normal highway speeds on the road, and on water at over 50 kmh,” which is currently being developed in Mount Wellington, Auckland.