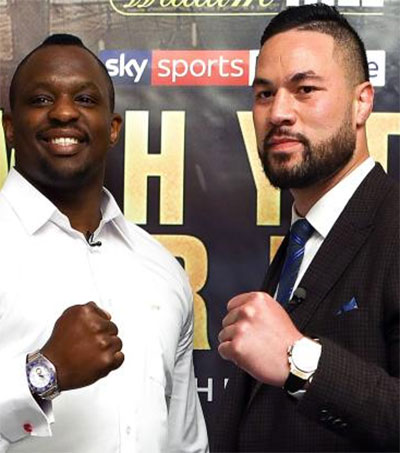 Joseph Parker probably did not expect to return to Britain within three months of losing his WBO heavyweight title to Anthony Joshua, but the South Aucklander was back in London, smartly suited up at The Dorchester in Park Lane announcing a heavyweight fight against Dillian Whyte.

“Things move very fast in the heavyweight business,” said Eddie Hearn, the promoter, who confessed that the deal had come together within 48 hours.

A call between Hearn and David Higgins, Parker’s promoter, saw both walk away from their other matches to fight each other, a bout that will take place at the O2 arena, London, on 28 July.

“We did an eight-figure deal within 48 hours,” Higgins said. “That’s quite unusual in boxing. It’s a 50-50 fight, two different styles and it could go either way.”

For Parker, 26, it was a brief stopover in London from his home in New Zealand before heading off to training camp in Las Vegas.

“I feel like I’m spending more time here than at home,” Parker said. “The last time was a great experience in Cardiff, even if I didn’t get the result I wanted.

“I’m looking forward to burning off the pies I ate in New Zealand and coming back with a win.”