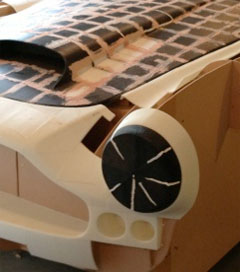 James Bond Would Be Impressed

Ivan Sentch, an Auckland programmer and Aston Martin devotee, has decided to build a full-scale 3D printed replica of a 1961 Aston Martin DB4. “He’s already made considerable progress, with much of the body’s core structure already completed and hanging on a custom jig,” Fox News correspondent Nelson Ireson writes. “You might think Sentch is some kind of 3D printing genius, into the technology from the ground floor, but he’s not. In fact, he’s relatively new to the field, having only started with the Solidoodle 3D printer he’s using for the project in January. Sentch had no previous experience with 3D printing or CAD design, which he used to make the 3D model required for the printer.

“Nevertheless, his progress so far is impressive, and we can’t wait to see the final result. Sentch estimates his plastic cost for the 3D printing process at about $2,000. Even including the price of the printer, that’s a bargain for an incredibly accurate body. Sentch isn’t going to stop there, however. He plans to use the body he’s currently printing to build a mold, then use the mold for the body of the final DB4 replica. A custom-built spaceframe and some go-fast parts a from Nissan Skyline GTS (to be removed from his current Ferrari 250 GTO replica, which will then get a BMW V-12!) will give the DB4 its structure and power, turning it into a real, running car.”