NZEDGE  >  News  >  Sport  >  Inside the Ring With Wrestler Toni Storm 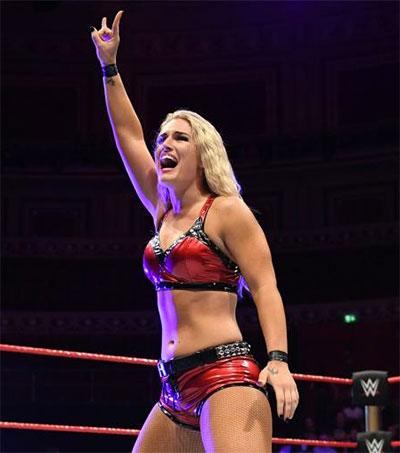 Inside the Ring With Wrestler Toni Storm

Toni Rossall, aka Toni Storm, has swiftly emerged as one of the most exciting members of the WWE roster; the 23-year-old New Zealander is a key member of the NXT UK roster. Storm won the Mae Young Classic this year and competed at WWE’s first ever all-women’s Pay-Per-View Evolution in October.

The up-and-coming star spoke to the UK’s Metro Sport about Wrestlemania, Kate Hudson and who really is the best Storm in wrestling.

Storm tells Metro her first match was as a 13-year-old.

“I was a lot smaller than I am now,” Storm says. “I was absolutely terrified and it was in front of hardly any people. I think I got paid with a hot dog and a can of soft drink.”

How does she feel about “gimmick” matches?

“When I was younger,” she explains, “and I probably shouldn’t have been doing this, but I was having a lot of street fight style matches. Lots of chairs, street signs, weapons. I did all that as a kid. I don’t know if I’ll ever go back to it, but I was very into it as a teenager! In WWE, I wouldn’t mind messing with some ladders. I’m a little scared of heights sometimes but I wouldn’t mind trying.”

And which building would she most like to wrestle in?

“I’ve done most of the good ones, Korakuen Hall and big arenas, but I would really like to do York Hall in London.”

The Auckland-born wrestler’s new haircut has been compared to Kate Hudson. What is her best film? Metro asks. “How To Lose A Guy In Ten Days, Definitely. But for me it could be How To Get A Title In Ten Days, I could do that remake!”