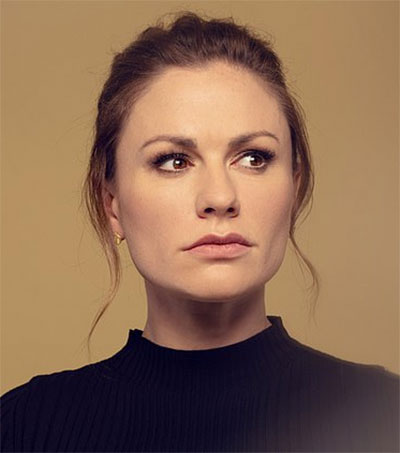 “Nobody wants to hear actors complaining about anything ever but let’s just say I’m not a teacher. I was raised by teachers and every single minute of every day doing this makes me give them even more respect,” Paquin tells the publication.

“I honestly can’t complain about all of this. We have some space at our home in California. There are people right now who are literally risking their lives to go to work and don’t have the luxury of staying home or being with their kids.”

Metro asks Paquin about working with her husband, American actor Stephen Moyer on the series, Flack.

“I love working with Steve and he loves working with me. He and I can go to some pretty dark places just because of the level of trust we have. In some respects I think it is a pretty brutal and aggressive look at what somebody’s rock bottom looks like.”

“How has it changed for child actors since your Oscar-winning role in The Piano in 1993, aged 11?” the newspaper asks.

“There are certainly more laws in place now over what you can and can’t do with kids on screen and on set. Some of that stuff has changed quite radically since I was a kid, as it should. But I honestly come from a really protective family who were not industry people but who damn sure got the rulebook out and read it cover to cover and protected me from everything that it was within their power to do so.”