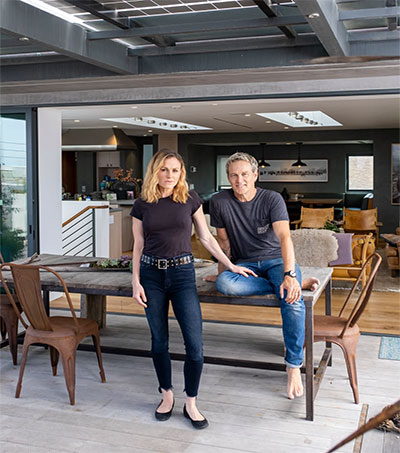 The story of New Zealander Anna Paquin and husband American Stephen Moyer’s Venice Beach home is one of ultimate artistic license. With their selections of architect, interior designer, and landscape designer over the course of the seven-year project, the couple proved their aptitude for directing a team of collaborators with strong individual vision, Kathryn Romeyn writes for Architectural Digest.

“It’s always exciting to surround yourself with people whose taste you absolutely love, who you really trust creatively, then not micro-manage but actually let them come up with their creations and ideas, so you’re not getting a watered-down version,” Paquin says.

David Hertz, a longtime Venice architect known for rooting his ecologically sensitive projects in occasionally outlandish materials (like the wings of a decommissioned 747) was hired to marry a bungalow, a vacant lot, and a duplex into one cohesive home. It took seven years, but he did it – seamlessly.

His concept was to create a home like a ship, with teak decks, stainless-steel railings, and reclaimed wood wrapping the exterior. Moyer had told Hertz, “I want the outside to look like driftwood.”

With their time in the highly personalised Venice abode now coming to a close, Moyer admits the decision to list it came with some emotional reckoning.

“We feel like it’s time to see what that next chapter is,” he says.