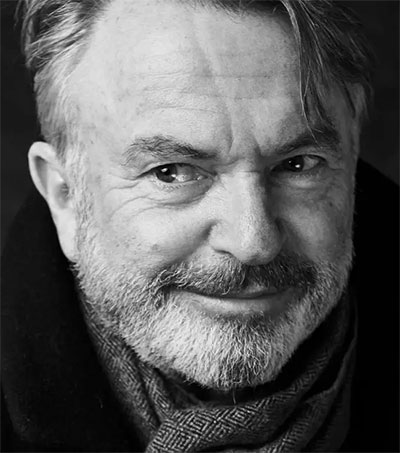 The Jurassic Park star Sam Neill has been entertaining the masses during lockdown with his ukulele playing and ‘Cinema Quarantino Productions’. He talks to The Independent’s Alexandra Pollard about his new role on season two of Flack (starring fellow New Zealander Anna Paquin), switching off the news, and why he trusts experts over clowns.

In Flack, Neill plays Paquin’s boss Caroline’s louche ex-husband Duncan, a man who “once snorted a gram of cocaine off Kylie Minogue’s bottom and then rode a Shetland pony into a swimming pool”. “Kylie’s a friend of mine,” says Neill with a giggle.

“I thought the series sounded fun,” he says when Pollard asks what drew him to Duncan. “The world of celebrity that is portrayed in Flack, I know it exists, but I am not conversing with it at all. It’s not my life. I have a handful of friends who are celebrities – I do not envy their lives at all. So it’s all a bit unfamiliar to me, I have to say – but it is amusing.”

More than anything, he took the job because it meant working with Paquin again. The pair first met on The Piano, the Jane Campion romance in which he played her colonist stepfather Alisdair, and for which Paquin won an Oscar at the age of 11. “It was the very first job she did, so it’s sort of closing a circle really,” Neill says. “She’s a mother of children and all that stuff, so that was a reunion which I found very pleasurable.”

Original article by Alexandra Pollard, The Independent, May 29, 2020.