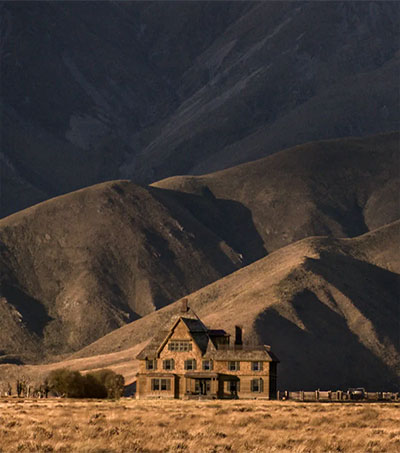 The Power of the Dog’s production designer Grant Major built the film’s ranch from the ground up on location in Jane Campion’s native New Zealand, which, thanks to its remoteness, was perhaps more convincing than present-day Montana would have been, complete with open land and impossibly beautiful mountains, Rachel Wallace writes for Architectural Digest.

The sets and the lingering of the camera provide important clues about what’s really going on between all of the players. “Montana is as rich a character as the lead four principals in this psychodrama of love and loss and revenge and all in an era where so much is in flux,” lead Benedict Cumberbatch said of the majestic setting.

Furniture was mostly shipped to New Zealand from a variety of prop houses in Los Angeles. “New Zealand furniture from that period is quite different and made from much warmer-toned local woods, often less decorative, and smaller, as our houses just aren’t built to the scale of the ranch,” set decorator Amber Richards said.

Tags: Architectural Digest  Jane Campion  The Power of the Dog