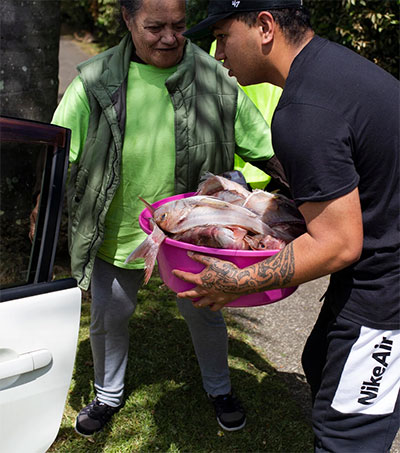 Papatūānuku Kōkiri Marae has been distributing two tons of fish a week – the parts often discarded in commercial and recreational fishing – to families affected by New Zealand’s sputtering economy. Sam Woolford, founder of LegaSea, a group concerned with destructive fishing techniques and the underuse of what is caught, was instrumental in the creation of Kai Ika, a charity that distributes fish heads in Auckland. New York Times journalist Serena Solomon reports on the organisation that’s “more than just charity; it’s a model for reducing food waste”.

“Our objective is to change the way people perceive these fish in their totality,” Woolford said.

Kai Ika distributed 250kg of fish a week before the lockdown. Now, it is handing out about four times as much.

With leisure boating in full swing, LegaSea has opened a filleting station at a local marina, in hopes of making Kai Ika self-sustaining. Leisure boaters are charged about $2 a fish for the filleting service, and the fish heads, bones and offal are sent to the Papatūānuku Kōkiri Marae, which has begun distributing the fish parts to other marae.

“We are in a time now where people need food and employment,” Woolford told The New York Times. “We’re lucky enough to do both.”