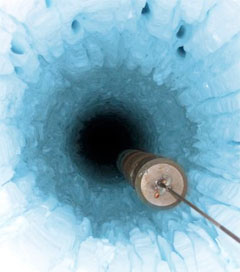 Ice Telescope to Reveal Secrets of the Universe

27 November 2013 – University of Canterbury scientists are using a telescope pointed at the earth’s interior over 2000m below the surface of ice in Antarctica to study tiny particles in the hope of revealing the secrets of the universe.

The scientists said the universe was producing high-energy “neutrino” particles that could lead to the source of the highest energy cosmic rays.

IceCube – a telescope that captures images of the universe in neutrinos rather than light – is located between 1450 and 2450m below the surface of the ice at the South Pole.

“We remotely operate the IceCube telescope, an Antarctic detector, so we can track the neutrinos, or tiny particles,” associate professor of physics and astronomy Dr Jenni Adams said.

Tracking neutrinos back to where they came from to make a map of the highest energy regions in the universe would give scientists an unparalleled insight into some of the biggest unanswered questions of the universe, such as what happened in black holes, the violent cores of distant galaxies and the wreckage of exploded stars, Adams said.