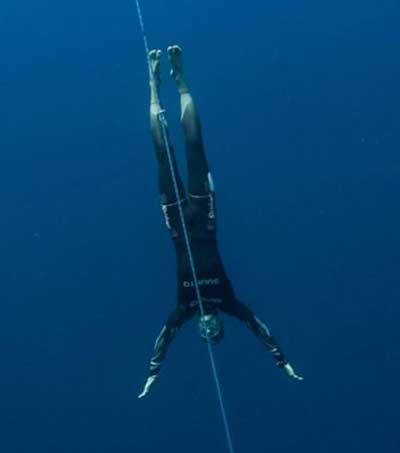 William Trubridge “is easily the greatest freediver to ever live, a multiple time world champion and holder of two of the three most significant world records in the sport,” writes Don Rowe for The Spin-Off, who met the champion New Zealand freediver at Float Culture.

Before diving, Trubridge tries to empty his mind as much as possible. Any excitement or adrenaline in that phase can be “counterproductive to your performance”. “It’s really hard to avoid getting sucked into that downward spiral towards panicking or freaking out,” he said.

In order to try and prevent that from happening, the freediver tries to focus on what he is doing at that particular moment. “Try and only control the things that you can control,” he said.

“In almost all of the Eastern practices of internal martial arts, yoga, there’s a lot of importance put on the breath and especially on breathing with the diaphragm. Without going into too much detail about the reputed physiological effects, they have made connections between that and being able to control other areas of your body and your mind. I think it’s really powerful,” he said.

When asked about how much analysis he is doing at 100 metres beneath the ocean, Trubridge replied that ideally there would be no analysis.

The freediver, who grew up on a boat, uses breath control and breathing techniques in his dive training. While there are a lot of physiological effects like the heart rate slowing down, Trubridge said it was more about the experience going inwards.

“When I first started training for freediving and holding my breath, basically doing a breath hold where you breathe out all your air and just sit there, through that I noticed that my body was developing these tractions,” he said.

“It wasn’t until later that I discovered in yogic texts that those are bandhas that are used in yoga to control or to hold the energy in the body. That was interesting because it was a case of conversion and evolution, or confirmation that those techniques are actually applicable if you come across them naturally.”

When free diving, “you feel an expansion of yourself outwards to the point where the concept of a body is kind of foreign. That’s the pinnacle of that experience for me, when I get that.”