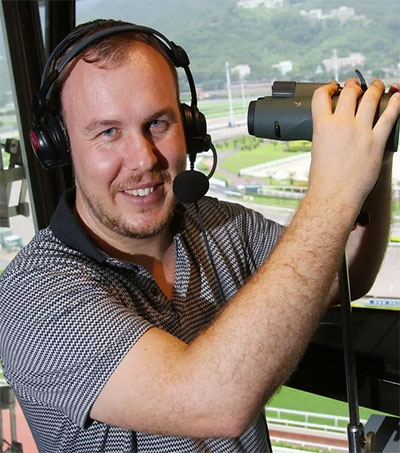 He started out commentating his brother running laps at their family home and now New Zealander Tom Wood, 28, is living out a dream as he settles into life as Hong Kong’s newest racecaller, South China Morning Post correspondent Sam Agarson writes.

It’s been a rapid rise for Wood, who comes to Hong Kong after an 18-month stint in Singapore.

“I thought Singapore was a good stopover for someone from New Zealand but never thought I would get the opportunity to come [to Hong Kong],” Wood says.

Wood comes from a racing family and his lifelong passion for racecalling saw him go to great lengths for the chance to commentate as a youngster.

“We had sort of a horseshoe-shaped yard with a concrete roadway round it and in the middle was an island of grass,” he says. “I used to make my brother run around there and I would stand on the roof, which was not safe at all, and make him run while I called him around.”

Wood started working for the New Zealand Racing Board as a trainee commentator at just 18 and says he called his first race meeting “at the Westport trots on Boxing Day in 2009, 16-horse fields on the grass”.

But he is quick to turn the attention back to the now and is primed to tackle his latest challenge head on, promising the Hong Kong racing public “accuracy and honesty”.