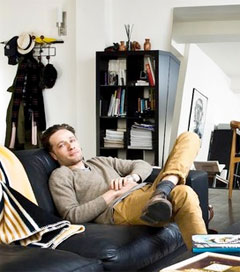 At Home in Manhattan with Makeup Artist Valery Gherman

Like most creatives’ homes, the main features of the space are art – framed prints by Fabian Baron and Derek Henderson – and an extensive collection of art and photography books.

There’s a mini version of the famed Helmut Newton SUMO book, complete with bookstand for ready display (the original version weighed 35.4kg and came with a Philippe Starck-designed holder). Plus, unsurprisingly for those who contribute to some of the world’s top titles, a library of magazines.

Gherman was born in Ukraine.