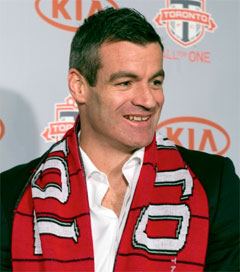 Former All Whites captain and Tottenham Hotspur player Ryan Nelsen, 35, has been signed with Toronto FC as head coach. Christchurch-born Nelsen is no stranger to Major League Soccer (MLS), having captained American team D.C. United to the 2004 championship. Nelsen, who played at American universities, Greensboro College and Stanford, appreciates MLS player development, which relies on a university feeder system for a portion of roster makeup. According to Washington Post sports blogger Steven Goff: “The hiring of Nelsen – natural-born leader, tenacious worker, as well as Olympic, World Cup and English Premiere League veteran – was a bold move by a team in need of bold change.”