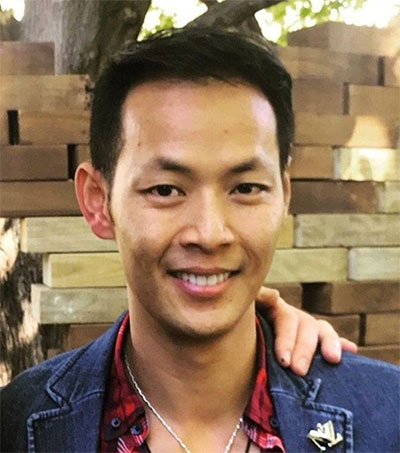 New Zealand garden designer Bayley LuuTomes has ticked a career goal off his bucket list and won a bronze medal in the process at this year’s Melbourne International Flower & Garden Show – the first New Zealander to win a medal there in 24 years.

“I’d been visiting the MIFGS for the past five years and saying, ‘One day I’ll make it to Melbourne’,” LuuTomes says. “When I was asked ‘So when are you coming to design us a garden?’ I said ‘Just say when!’”

A golden elm growing in Carlton Gardens, one of the show’s locations, provided the inspiration for LuuTomes’ show garden, aptly named Under the Golden Elm, and he managed to obtain special permission from the local council to build the garden there.

Around the elm he constructed a hive made from 1200 wooden blocks – each cut, sanded and stained by hand – creating a cocoon-like space with comfy cushions and throws where visitors can gaze up at the tree canopy or settle down with a book.

The garden celebrates themes of discovery, whether that’s discovering your inner-self by inhabiting spaces of contemplation such as the hive, discovering the beauty that surrounds us (the hive has many peepholes where visitors can steal glimpses of the garden’s dreamy drifts of planting) or discovering the beauty in others – a romantic picnic scene is set up in a grassy area.

More than 13,000 plants were used in the garden, including ferns which remind LuuTomes of his New Zealand home and woodland drifts of liriope and foxgloves.

LuuTomes, who has won awards for his gardens in South Africa, Japan, Philadelphia, Singapore, England and France, won a Design Excellence and Gold award for his garden Trouvaille: Something Lovely Discovered by Chance, made with Leon Kluge, at the 2017 New Zealand Flower & Garden Show.

New Zealand-born chef Analiese Gregory, 36, tells the Financial Times “why she turned her back on the world’s chicest restaurants to set up home – and a kitchen – at the…