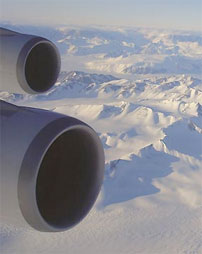 Flights Back to the Ice

Antarctica Sightseeing Flights is offering the first commercial flight from New Zealand to Antarctica – 33 years after the Erebus disaster. The tourism operator will take a chartered Boeing 747 from Auckland to the continent in February next year. The day trip, using a Qantas jumbo jet, will be the first time a commercial flight has left New Zealand for Antarctica since a DC10 crashed into Mt Erebus on 28 November 1979 killing all 257 on board. Antarctica Sightseeing Flights chief executive Phil Asker said the company was “very sensitive” to the fact the Erebus disaster still loomed large for New Zealanders, despite the passage of time, but took into account evidence that New Zealanders want to make the flight. “We are certainly seeing that demand,” Asker said.