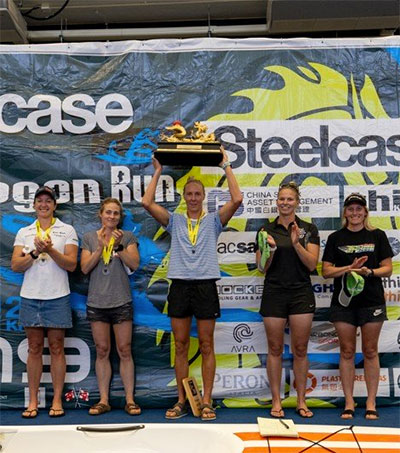 World champion surfskier New Zealander Danielle McKenzie proved that winning the ICF Canoe Ocean Racing World Championships in France in September was no fluke when she backed up her performance in Hong Kong recently with another victory, the South China Morning Post reports.

The surfski event in Europe was her first overseas race, but even with no track record she took gold, Mark Agnew writes for the Post.

With the prize money she earned, she travelled to Hong Kong and raced in The Steelcase Dragon Run, part of the World Surfski League. The 21km race took paddlers, aboard their seagoing kayaks, from Clear Water Bay to Stanley.

“I’ve done a lot of international races in surf life saving, so I have high expectations for myself,” McKenzie said.

“[In Hong Kong] there wasn’t a prevailing wind, but there was a big ocean swell,” she said. “There was quite a big backwash coming from the rocks and cliffs, and I’d be working quite hard over the last few weeks so I was able to ride them back out to sea.

“I went into the race pretty confident. I’d been doing a lot of training in the last three weeks.”

McKenzie’s decision to take up surfskiing came more out of convenience than anything. She was heading to South Africa for a surf life saving competition and noticed the surfski World Championships in France.