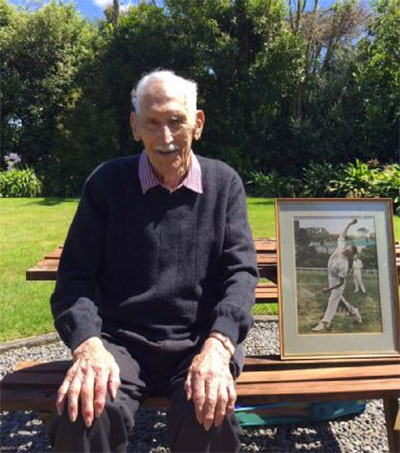 Right-armer Tom Pritchard, who has just turned 100, was born in Taranaki and took 818 first-class wickets at 23.30 – sitting fourth on New Zealand’s first-class wicket-taking list behind Sir Richard Hadlee – but he never represented his country.

Pritchard, New Zealand’s oldest living first-class cricketer, claimed 818 wickets and was considered one of the fastest bowlers of the 1940s. In fact, after he took 4 for 46 for Warwickshire against the touring Indians in 1946, India captain Vijay Merchant wrote a letter of thanks to the county, in which he called Pritchard “the fastest bowler in England at the time”.

Why was Pritchard, a New Zealander who had earlier played for Wellington, in England playing for Warwickshire? Because he served in the armed forces in Europe during World War II, married an Englishwoman, and set up home there after the war.

In an interview with Andrew Alderson of the New Zealand Herald, Pritchard told of how in the post-war era he would have “at least two beers before I went out at lunchtime, some at afternoon tea and a couple afterwards. All with the magnificent people we played against.”

Pritchard bowled fast outswinging offcutters – the change of direction made him a particularly difficult customer for batsmen to face – but playing in England for much of his career limited his opportunities to play for New Zealand. He represented his country only once, in a match against Sir Julien Cahn’s XI in Wellington in 1939.

Pritchard has lived in Levin since 1986. A biography, Tom Pritchard: Greatness Denied by Paul Williams, was published in 2013.