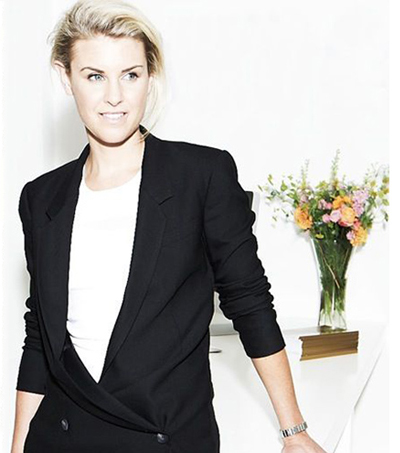 Mules is originally from New Zealand where she studied fashion design. After graduating she set up a business designing swimwear, but the New Zealand market was so small she “realised this wasn’t going to be a lifetime career.”

“I moved to New York with the mission that I wanted to work for Marc Jacobs. I actually ran into him on the street and asked him for a job, which I got,” said Mules.

When she couldn’t secure a work visa she came to the UK (her grandfather was British). “I knew that it was the centre of the fashion world, so I came with a heavy portfolio and really high ambitions of getting a lot of design work when I was here. I got an internship with Alexander McQueen not long after I arrived, which was amazing,” she said.

When asked how her own label Lucas Hugh came about, the designer explained: “I was always on a mission to set up my own brand. Coming from New Zealand, I’m naturally very into fitness. I ended up working to save up and build the business. I was alternating working for two weeks on a private jet in Moscow and then I was doing two weeks interning for McQueen in London.”

On highlights for the brand the New Zealand designer told Drapers:

“When we launched in 2010 we had a princess – I can’t say who – buy one of every piece in our collection. Net-a-Porter was our first stockist, and when that happened I felt like we’d made it. Dressing The Hunger Games: Catching Fire was also amazing.”

“The head of wardrobe googled “futuristic sportswear” and found us! I went on to design all the training outfits for the men and women in the film. It was very different from how we work on a normal collection and working on menswear was really exciting,” she said.

In the interview Mules also speaks about challenges she is facing in the business, what she’s learned since starting the business and her plans for the future. Read more here.

The lines between jewellery and accessories are blurred in the hands of New Zealand-based jeweller Jasmin Sparrow, who plays with materials and forms for romantic, vintage-inspired designs, Hannah Silver reports for…