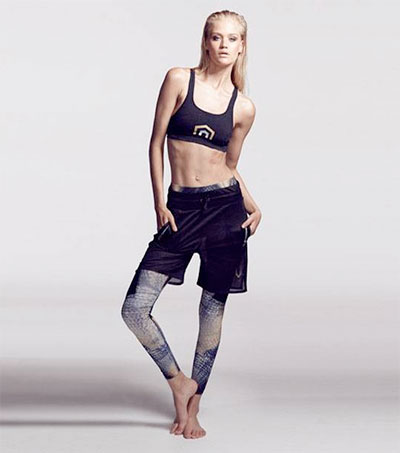 Mules, a successful swimwear designer in her homeland, moved to London 13 years ago after a chance meeting with Alexander McQueen led to her being offered an internship and then a design position at the label. While the swimwear market was saturated, she spotted a gap for high performance, high fashion activewear.

“I run a lot and it was difficult to find interesting and high performance running gear,” Mules says. In fact, she used to wear men’s Nike because she preferred the designs. And so the idea for Lucas Hugh was born.

The brand launched in 2010, initially as a runwear line, and has since expanded into yoga, cycling, skiing, barre, cycling and triathlons – one of its newest creations is a tri-suit with a padded cycle seat and built-in sports bra.

“When we first launched there was little crossover between technical performance and fashion,” she says. “In swimwear there were all these beautiful prints but nothing like that in athletics – there was Stella McCartney for Adidas but that was more streetwear, not functional performance gear.”

Now people accept it as both fashion and sport wear, indicating a move towards the Antipodean habit of spending the majority of leisure time in gym gear.

“In New Zealand sport is the one thing we excel in so we take pride in our athletes. Women aspire to those fit body shapes and it inspires people to work out to achieve similar results. Whereas in the UK people are more inspired by ‘it’ girls or celebrities.”