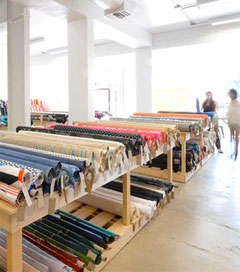 Fabric Store from NZ a Natural Fit in LA

The Los Angeles location for The Fabric Store, a New Zealand-based business that also has four retail stores in its native country and three in Australia, offers “a more edgy, fashiony focus than a typical store,” owner Roger Wall says.

Tags on the rolls make it evident that this is no run-of-the-mill fabric shop: Some are labelled with the names of major fashion designers, such as Tory Burch, Marc Jacobs, Diane von Furstenberg and Donna Karan.

“We buy 1- or 2-million yards of fabric a year from European and American clothing designers,” Wall says. “We buy all the sample yardage that they retained and never made into garments. And we buy from the designers because they don’t want it hanging around.”

Company publicist Ann Flower also notes how the New Zealand stores are a major resource for costume designers, such as Ngila Dickson, known for her work on The Lord of The Rings films, and Kirsty Cameron, whose credits include Whale Rider and In My Father’s Den. So what better location than Hollywood for the brand’s first US outpost?