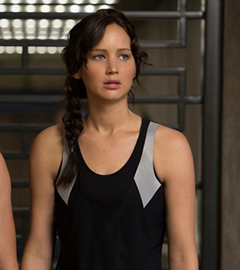 New Zealand-raised Anjhe Mules is the designer responsible for the sportswear worn in the new film from the critically acclaimed Hunger Games trilogy.

“She saw a jacket from our line,” Mules said, “and she just thought it was perfect for the movie.”

“They’re made in the same factory as the Olympic clothing,” she said. “[Trish] wanted the best quality, a high performance athletic brand.”

Two of the film’s stars, Jennifer Lawrence and Josh Hutcherson, wore her garments, which were mostly black with grey and silver feature panels.

At the world premiere, Mules was told by the film’s cast they had been nervous about wearing lycra, but were “really happy” with her clothing.

Mules began her career studying fashion at Massey University in Wellington, and said although she now lives in London, she is still influenced by the Kiwi lifestyle.

“In New Zealand, you can wear your gym gear while taking the kids to school and then head to the gym – everybody’s multi-tasking.”

Hunger Games: Catching Fire is the second part of the three-part film trilogy, and opens in cinemas worldwide today.

The first instalment, The Hunger Games, was released on March 23, 2012 and set records for opening day ($67.3 million) and biggest opening weekend for a non-sequel film. At the time of its release, the film’s opening weekend gross ($152.5 million) was the third-largest of any film in North America. The film was both a critical and box office success.