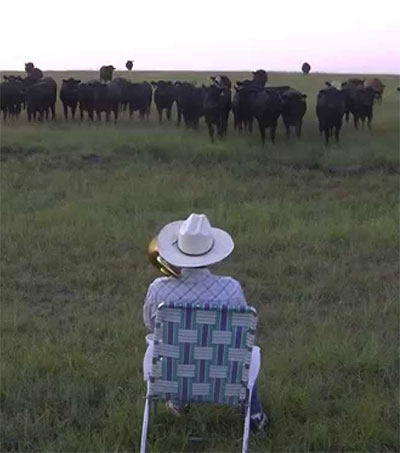 An American farmer and YouTube sensation plays a mesmerising video version of Lorde’s 2013 smash hit single “Royals” on his trombone whilst sitting in a deckchair overlooking a vast pasture. Soon, a herd of dozens of cattle emerges on the horizon.

Over 9.5 million people have viewed the video.

“[Derek Klingenberg’s is not a] particularly world-class performance, but he clearly knows his audience,” US rural music and lifestyle site Wide Open Country writes.

“Of course, there’s a pretty good chance the cows are coming in from pasture because they mistook Klingenberg’s tromboning for the cries of a wounded comrade. But by the time he’s done, he’s got a pretty captive audience – one most musicians would be more than happy to have.”

The single “Royals” made Lorde, now 18, the youngest solo artist to achieve a US number-one single on the Billboard Hot 100 since 1987. In 2014, the song won two Grammy Awards in the categories Best Pop Solo Performance and Song of the Year.