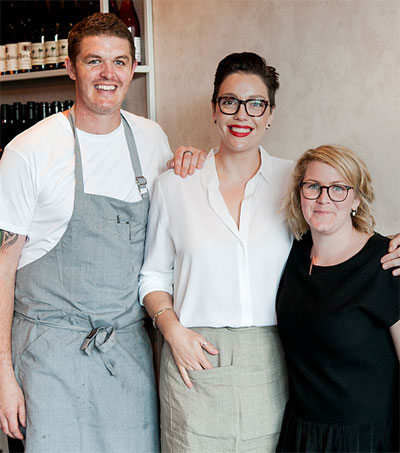 Etta in Melbourne’s Brunswick East has just opened. The 80-seat bistro’s kitchen is overseen by New Zealand-born chef Hayden McMillan, formerly of The Roving Marrow, and along with Hannah Green (pictured right), he runs the restaurant with wife Dominique Fourie McMillan.

McMillan and Green used to work together at Neil Perry’s Rosetta and would regularly eat together at The Roving Marrow, where the group concocted their own future operation.

McMillan’s seasonal menu draws on flavours from all over the world.

More than half of the Etta menu is vegetarian. Dishes include tamari and brown-sugar-roasted buttercup pumpkin served with a dairy-free sunflower cream, and eggplant schnitzel fried in Japanese-style Panko breadcrumbs. “Much like a veg tonkatsu,” McMillan says.

Flinders Island lamb is marinated in a cumin and fennel seed dry rub and cooked on a Japanese-style binchotan charcoal grill. For dessert, the team invested in a Pacojet ice-cream machine to make “coconut snow” (coconut-flavoured shaved ice), served with peaches, verjus and “coconut fromage” (mascarpone, crème fraîche and coconut).

McMillan is originally from Auckland, where he worked at Meredith’s and The French Café amongst others.