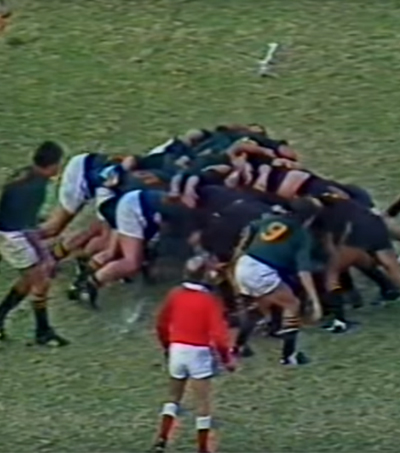 It has been 30 years since the All Blacks rebel tour forced a split in the New Zealand public, Huw Richards writes for ESPN. “The match between the New Zealand Cavaliers and the Junior Springboks on [23 April 1986] was the moment at which the game’s running sores of the 1980s, complicity in South African apartheid and the multiple hypocrisies involved in the struggle to preserve an increasingly untenable amateur ideology, came into direct conjunction.

“The Cavaliers mostly were All Blacks in one sense. Twenty-eight of them had been chosen for the previous year’s official tour of South Africa, which was cancelled when a judge imposed an injunction ruling that the contentious nature of contact with the Republic – the Bok tour in 1981 led to New Zealand’s most serious public disorder in decades – placed it in breach of the New Zealand Rugby Union’s constitutional commitment to ‘the fostering and encouragement of the game of rugby’.

“A closer look at the shirts gave the game away. They were that familiar shade of black, but the hallowed silver fern had only equal billing with a sponsors logo. Nominally organised by the Transvaal Rugby Union, it was instead a commercially-backed ‘rebel’ tour set in train almost as soon as the 1985 venture was cancelled.

“The Cavaliers represented a low point in the relationship between the game of rugby and much of the New Zealand population, already seriously damaged by the events of 1981.

“But like most low points it was followed by a revival. The Baby Blacks represented a fresh, untarnished start and a timely influx of prime, youthful talent which combined with survivors from the Cavaliers to take New Zealand to its resounding victory in the following year’s inaugural World Cup.

“Apartheid and amateurism would take a little longer to resolve.”