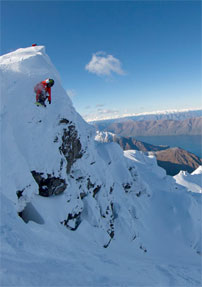 “Imagine a contest where a helicopter lifts you to the highest peaks in Mount Aspiring National Park, and for two days, you get to ski powder, cliffs, and backcountry kickers,” Megan Michelson writes for ESPN. “That’s the basic premise of the World Heli Challenge, a big-mountain and freestyle ski and snowboard contest that was founded in 1995, discontinued in 2001, and then resurrected in 2009. ‘This year, the snow coverage was much better, opening several lines that were unskiable in 2011,’ event founder and director Tony Harrington said. ‘The competitors took full advantage of the conditions, showing us why they stand amongst the best in the world, skiing long fluid lines down spines, off rock faces and through narrow chutes.’”