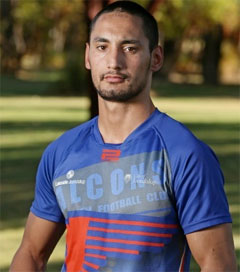 Young’s Maori heritage also meant when he finally had a crack at Australia’s indigenous game, it was considered merely a means of staying fit during rugby’s off- season.

Neither of those facts stopped West Perth from saying yes when he wrote to the club in October asking for a crack at a footy career.

Four months on, Young is coming to the end of his first full pre-season with the Falcons and is on track to achieve his target of at least one league game this year.

“In rugby it’s much more head-on. I really like AFL because you don’t have to be big or strong.

It is estimated 30,000 New Zealanders take part in Australian Rules programs, while St Kilda have committed to hosting an AFL match on Anzac Day in Wellington for the next five years.