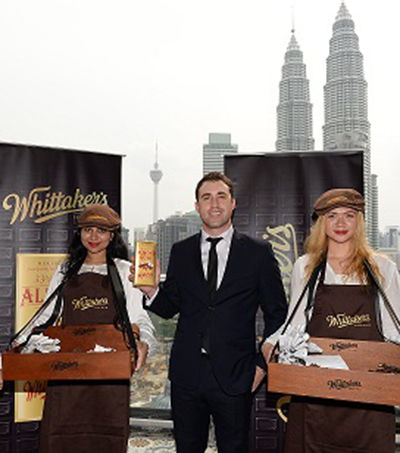 Iconic Kiwi company, Whittaker’s Chocolate, is confident they will be the leader in Malaysia’s premium chocolate segment in two years.

Whittaker’s, which has been sold in duty-free stores in Malaysia for the past 10 years, believes it is time to venture into the Malaysian retail market given its strong year-on-year growth in the duty free segment.

“Now is the right time to tap into the Malaysian market given our strong growth in duty free,” said Aida Rizvo, managing partner at Emerge Partners, who is the consultancy partner for sales and marketing for Whittaker’s in Asia.

Rizvo, alongside Whittaker’s head of international markets, Matt Whittaker, who is also the great-grandson of the company’s founder, are in Kuala Lumpur for the premium chocolate’s official launch into the local retail market.

“We have already partnered with AEON Big, Aeon, Tesco and Dairy Farm and we’re looking to be distributed through 15 retailers collectively by year-end,” said Rizvo, while divulging that DKSH Malaysia Sdn Bhd has the sole distribution rights to the brand for the retail segment.

Earlier, Matt Whittaker announced two new flavours designed specifically for Malaysia, namely the Peanut Butter Chocolate and the Macadamia, which are already part of the 12 total flavours being offered.

Whittaker’s expects its premium brand of chocolates to be distributed through 15 commercial retailers in the country by the years end.

All Whittaker’s products are certified halal and suitable for Malaysia’s large Muslim population.

Established in New Zealand over 100 years ago, Whittaker’s is a family-owned company that has become an iconic New Zealand brand, and was voted New Zealand’s Most Trusted Brand the past two years.