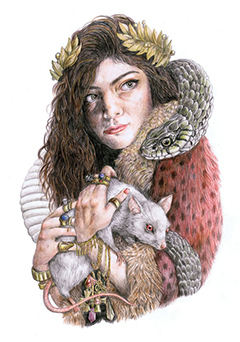 In an interview, Auckland singer-songwriter Lorde, 16, said that unlike many female teenage artists, boys aren’t all she is interested in when it comes to writing songs. “I feel like that isn’t maybe the best thing for young girls to be hearing or molding their lives around.” To buck another trend of contemporary female artists, Lorde, whose real name is Ella Yelich-O’Connor, admitted to Huffington Post writer Noah Michelson that she is a feminist, conceding that it’s concerning that female artist proclaim “I’m not a feminist. I love guys!”. “That’s such a worrisome portrayal of feminism,” Lorde explains. “A lot of girls think it’s not shaving under their arms and burning bras and hating boys, which just seems stone age to me.”

Growing up with a poet for a mother and writing short-stories, the 16-year-old artist explained that to breaking a ‘market’ has never been her intention, but instead it has been about making ‘art’, “I just want to do my thing and be in control and stay true to my vision as an artist and if that works and I get “broken” [laughs] then maybe it’s right. It’s not a big thing for me. It would be nice – I’d like it if a lot of people were hearing my music.” Lorde’s debut single ‘Royals’ spent three weeks on the top of the New Zealand charts when she debated her first single ‘Royal’s in March.