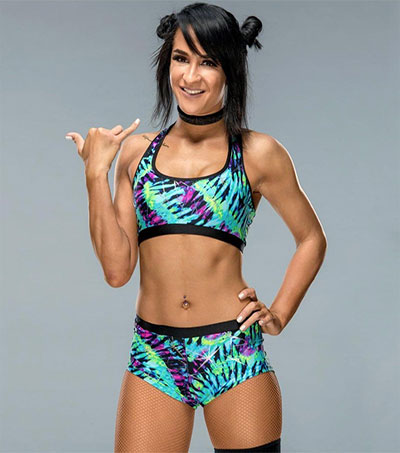 Thirty-year-old Aucklander Dakota Kai signed with World Wrestling Entertainment (WWE) more than a year ago but every now and then, she still has to pinch herself.

It’s easy to see why. Kai is breaking new ground for New Zealand women wrestlers and it keeps getting better and better.

In April, Kai was preparing to watch WrestleMania, the WWE’s flagship event, from backstage, when she was paid a surprise visit the night before by high-ranking executive and former wrestling star Paul Levesque, better known as Triple H.

Next thing she knew Orlando-based Kai, whose real name is Cheree Crowley, was strutting her stuff in the WrestleMania pre-show, walking out in front of 80,000 people at the Superdome in New Orleans to realise a career-long dream.

“It’s still hard to believe that happened. Us girls involved found out literally the night before,” Kai told Stuff.

“The whole experience was a whirlwind of emotions. Walking out in front of [all those] people, as you could imagine, it’s the scariest thing in the world. But it was really, really cool.”

It’s just a taste of what she hopes to achieve after becoming the first woman from New Zealand to crack the WWE.

“Being here has been my dream for at least the last 13 years,” she said. “I spent a lot of that time working the independent scene so to be here is still really crazy to me.”

Her ‘gimmick’ in the WWE is a typical girl next door – with a kick – but she describes herself as “very much a tom-boy”.

She comes from a strong sporting family. Her grandfather, Pat Crowley, played six tests and 15 games for the All Blacks between 1949-50. Younger sister Nyrene is competing for a contract with the biggest mixed martial arts organisation in Asia, One Championship.

Kai’s ultimate goal is to be a WWE champion and given what she had to go through just to reach this point, don’t put it past her.

In the short-term she is eying up a place on Evolution on 29 October, the first all-women’s pay-per-view event in WWE history.