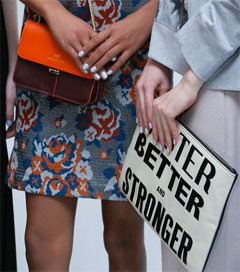 Karen Walker’s suffragette-inspired fall 2014 collection was shown at New York Fashion Week; “a modern and tongue ‘n cheek nod to women on the march”, the Daily Mail reported from the catwalk.

“Our collections are always inspired by strong women,” said the New Zealand-born designer backstage. “It was only a matter of time before we got to the suffragettes.”

Initially it was archived images of some of New Zealand’s most famous suffragettes, like Kate Sheppard and Mary Ann Müller that inspired Walker – or more accurately, their use of graphics.

“It was something that I hadn’t really registered before,” she explained. “They subverted anything they had on hand to get their message across. “They would print their messages on anything: dresses, bags and even money.”

The idea of subverting beauty to communicate a story was put to use literally on Walker’s statement bags, which acted as metaphors for the attitude of the modern women: “Faster Better Stronger” and “Liberal Miserable Cynical” were printed on several clutches.

Walker may have approached her fall collection with a rejection of traditional prettiness, but the designer remained true to what she does best: charming and youthful un-fussy shapes, all tied together with a utilitarian and practical sensibility.

Walker was included in The Business of Fashion’s BoF500 as one of the 500 people and 118 designers who are shaping the global fashion industry in 2013. Phaidon have also included Walker in their recent book Sample, which curates the 100 most influential designers to emerge in the last 6 years.

Photo by Getty Images for JINsoon.