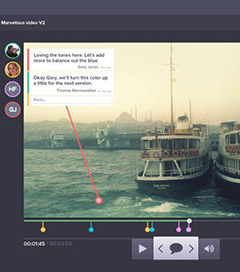 Wipster allows editors to share their work privately with clients, who can then watch the video and give feedback by clicking on the screen and writing in comments. In just over a year, the cloud-based video review and approval platform has been used in more than 65 countries around the world.

More recently, Wenlock travelled to Texas to unveil Wipster at the SXSW festival, which pulls in some 50,000 visitors – made up of the music, film and interactive industry’s most influential names.

Wenlock says the experience was incredible.

“SXSW is amazing, it’s the place to discover and test the latest ideas from the interactive industries… it’s the place where tech meets art,” he said.

“You really need to be in the area to take advantage of the opportunities, it’s a huge group of creative people,” he said.

Following the SXSW festival, Wenlock went to San Francisco presenting Wipster to new audiences and filming a series about the future of video, when he found out popular note taking and archiving app maker Evernote had bought a subscription to Wipster. In true kiwi fashion, Wenlock called the $1 billion company to pop by and “show them how it works in person.”

Evernote has more than 11 million users and after an impromptu hour-and-half meeting, Wenlock says they were so impressed with Wipster, Evernote are now looking at ways to roll out Wipster features to their paying users.

“If I hadn’t been here, none of this would have happened, there’s a lot of serendipity about this,” Wenlock said.

Wenlock says the next step is to begin ramping up sales to production companies and advertising agencies, and tweaking the ‘product-market fit,’ – aligning Wipster better with the requirements of its users.

After just a few days back in Wellington, Wenlock will be returning Stateside to attend the National Association of Broadcasters in Las Vegas next week.