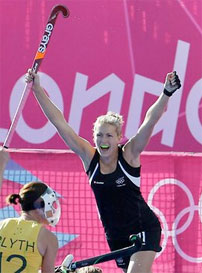 Win Over Rivals in London

The Black Sticks have beaten Australia at the London Olympics 1-0 in the opening game of the women’s hockey tournament, a first win over their rivals in Games history. The Black Sticks rode on an early goal from Cathryn Finlayson in the Group B match to secure their landmark triumph. It was the first time the Black Sticks had taken even a point off Australia in the Games, having lost by at least three goals in the past. New Zealand was the more cohesive team, but both sides created enough chances to have added to the score. New Zealand coach Mark Hager said: “It was not pretty, we were lucky. They hit the post.”