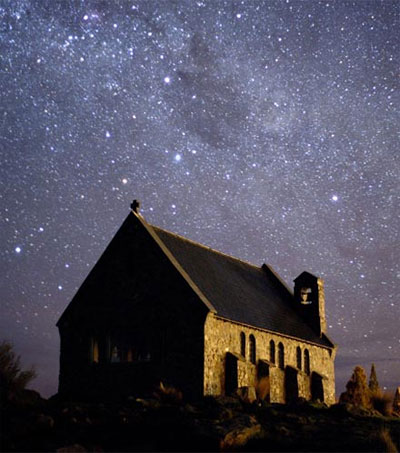 “Science and mythology intertwine at Lake Tekapo, the centrepiece of the largest dark sky reserve in the southern hemisphere,” Ricky French writes in a travel piece published online by The Australian.

“They call it ‘Mackenzie Country’, a vast intermontane basin in the barren centre of New Zealand’s South Island where the world is mostly taken up by sky. Famous for its sheep farming, today the region is riding on the back of stars as well as sheep, finding an unlikely niche as a world-renowned astro-tourism destination,” French reports.

“In recognition of its clear skies, and community commitment to limiting light pollution, 4300sq/km of the basin and adjacent Aoraki/Mount Cook National Park has been declared the Aoraki Mackenzie International Dark Sky Reserve.

“It’s the largest dark sky reserve in the southern hemisphere, and the centrepiece is Dark Sky Project, an $11m educational hub with access to New Zealand’s premier astronomical research observatory atop nearby Mt John. It celebrates its 10th anniversary this year.”