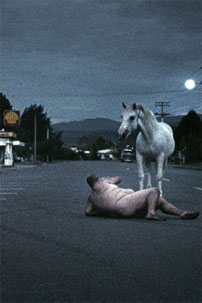 Where Fear And Awe Collide

Greymouth-born filmmaker and painter Vincent Ward’s exhibition Breath, which is on at New Plymouth’s Govett-Brewster Gallery through 26 February 2012, is the first survey of Ward’s work within an art museum context and rests, sometimes on edge, in spaces that traverse old and new technologies. Breath is an exploration of the still image and presents works that coalesce photography, oil painting and digital imaging, presented alongside a choreographed passage of filmic vignettes, ‘motion painting’ and soundscapes. “The exhibition conveys the concept of ‘wehi’, where fear and awe collide. It is a celebration of life’s intensity,” Ward says. In 2010 he published Vincent Ward: The Past Awaits, a chronicle of his life in film. Ward’s debut feature was Vigil in 1984.