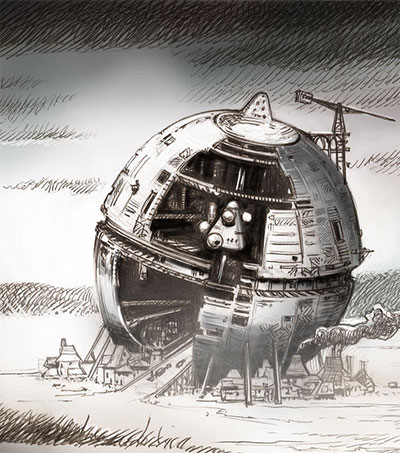 “For every glittering Hollywood project that hits cinemas, there’s a whole lot more that don’t make it,” the Guardian’s Tom Huddleston reports. Included in his top five is New Zealand-born photographer and filmmaker Vincent Ward’s, Alien 3.

“Anyone who has seen [his] bracingly weird debut The Navigator: A Medieval Odyssey – imagine an 80s time-travel romp directed by Andrei Tarkovsky – can appreciate how much promise he started out with,” Huddleston writes. “His talent was quickly recognised by producers Walter Hill and David Giler, who were looking for a bold approach for their third Alien movie, something as different from the warlike Aliens as that film was from its stark predecessor.

“Inspired by medieval religious art, Ward envisioned a wooden planet drifting in space, a man-made satellite carved like a Gothic cathedral and cocooned in an artificial atmosphere, where technophobic monks study and pray in isolation. Into this hermetic world come Ripley and the alien, with chaotic results – monks die in droves, wheat fields are set ablaze and the wooden planet is burned to a cinder.

“Amazingly, Ward and his co-writer John Fasano’s concepts were approved, and construction actually began at Pinewood on sets for the wooden planet. But the script continued to be controversial, and the plug was pulled by 20th Century Fox before shooting could start. Ward resigned, and the wooden planet idea was junked in favour of a gloomy space prison.”

He was born in Greytown.