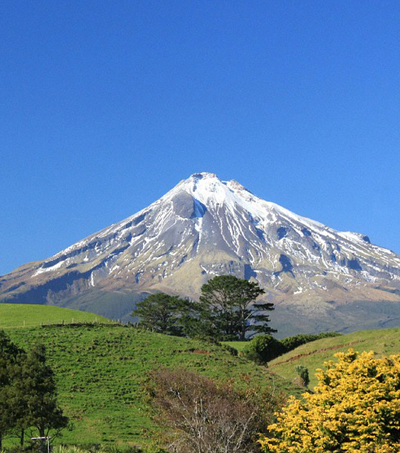 “Recognition is something Māori communities have been campaigning for over 150 years. In 2013, they achieved a landmark ruling when the Te Urewera national park on the North Island was granted ‘all the rights, powers, duties, and liabilities of a legal person’,” writes Phoebe Smith in an article for The Guardian. “Last year, the Whanganui River was also given ‘person status’, and soon the last of the documents will be signed to make Mount Taranaki the first mountain in New Zealand to be awarded the status of a ‘legal personality’”.

“Rising to 2,518m above the town of New Plymouth, the stratovolcano of Taranaki is an arresting sight that almost demands to be climbed,” writes Smith.

With last year’s opening of the two-three day trek Pouakai Circuit tourist numbers have increased. As a result problems have arisen “that are above and beyond those of inexperienced walkers getting hurt on the 10-hour hike to the remote summit of Taranaki, where the weather can be fickle and treacherous.”

“It [the damage] is not only unpleasant but a huge insult to the Māori who see the mountain as a person already,” said White. “The thing you need to know is that the Māori don’t believe we own the land but rather we come from the land.”

“Māori legend focuses on the peak as a person, as a man living in the centre of the North Island before going to battle with rival Mount Tongariro over the beautiful, smaller Mount Pihanga. Injured and fleeing west, he even created the gorge of the Whanganui River during his escape.”

“So you see it makes sense,” said White. “Giving the mountain person status will hopefully mean that people think a little more carefully before doing anything they shouldn’t. You wouldn’t drop litter or go to the toilet on the resting place of your ancestors – and that’s what Taranaki is to the Taranaki iwi people: an ancestor.”

Conferring person status on a mountain will not change access to the mountain. Once the status if official, “if someone does something harmful or disrespectful to the peak, it is legally the same as if they did it to a member of the tribe themselves.”