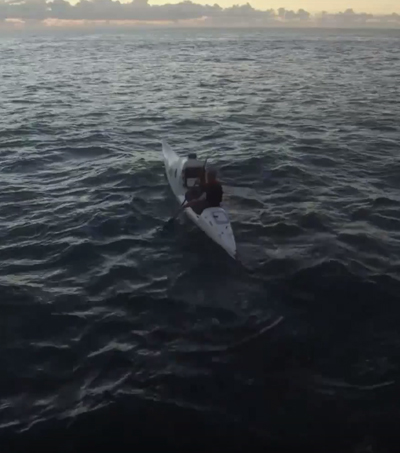 “Scott Donaldson has arrived in New Plymouth after spending two months at sea, covering 2000km,” as reported in The Guardian. “The 48-year-old has become the first person to kayak the more than 2000km from Australia to New Zealand alone.”

“Over the eight weeks, Donaldson paddled up to 16 hours some days, navigating six-metre swells and sharks attacking his rudder.”

“On a worse day you’re going backwards,” he told reporters on Monday.

“The attempt was not Donaldson’s first. In 2014 he came painfully close. More than 80 days into his trip and only 80km from land he had to abandon kayak, battered by a once-in-a-generation storm,” reports the article.

“Based on last time we all know what can happen, so I refused to think about it until I was at the beach, so it hasn’t sunk in yet”.

“Last time was an adventure, this time was a race.”