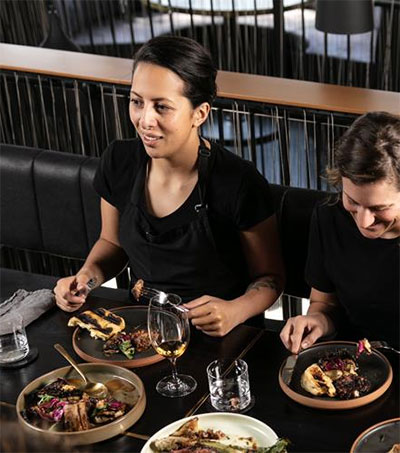 It was whānau that brought Monique Fiso back to Wellington. After seven years living in New York City, where she worked in a number of Michelin-starred restaurants, including The Musket Room, Fiso was ready to come home, Joanna Hunkin reports for Gourmet Traveller.

In Māoridom, there’s a strong sense of collective responsibility: when a member of your whānau succeeds, it’s a success for the whole family, Hunkin writes.

Which means the Fiso whānau has a lot to be proud of right now. Since opening in 2018, Fiso and her restaurant, Hiakai, have become an international success story. Last year, Time magazine named Hiakai one of the greatest places in the world, while Forbes singled it out as one of the 10 hottest places to eat in 2020.

Gourmet Traveller asks Fiso to share a menu that celebrates whānau in all its forms, capturing flavours and memories of the past. She chose to make this meal for her Hiakai whānau – the team who works alongside her every day and continues to make her dreams a reality. Several of these dishes take time, Fiso explains, which is something the busy chef doesn’t have in surplus. To make them, she says, is to tell someone you love them. That they are special. That they are whānau.