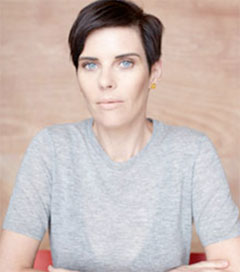 Walker and De Mey Are the Fashion Business

New Zealander Karen Walker has been named as one of the world’s most influential designers by leading industry website The Business of Fashion.

Walker was one of 118 designers included on the site’s annual Bo500 list, alongside Victoria Beckham, Karl Lagerfeld, Stella McCartney and Georgio Armani.

The site says: “Walker has been called the designer for anti-‘It’ girls, with a particular cult following for her funky sunglasses, favoured by bloggers and celebrities like Lady Gaga.”

“Walker’s 1998 debut at Hong Kong Fashion Week increased her visibility dramatically, with Barneys picking up the collection of reworked business suits, entitled ‘Daddy’s Gone Strange’. Since then, she has steadily grown to be New Zealand’s most famous fashion export, with over 250 stockists all around the world.

“The Karen Walker label is a collaborative effort, with the designer’s husband, creative director Mikhail Gherman, involved in marketing and production.”