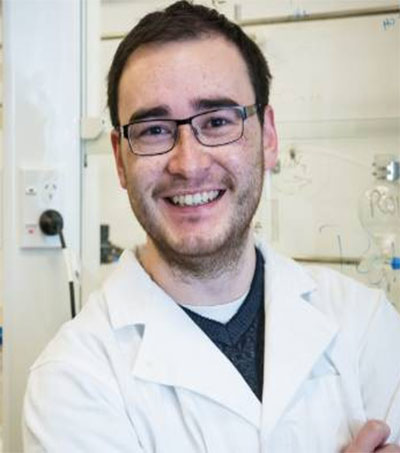 Victoria University PhD candidate Ryan Schwamm, 26, has become the first New Zealander to be nominated for the prestigious Reaxys PhD Prize in chemistry, which recognises the best work being done by young chemists around the world.

His work will stand alongside that of his peers at the likes of Cambridge, Harvard, Kyoto, Stanford and Princeton universities and the Chinese Academy of Science.

Schwamm, from Lower Hutt, was happy to be one of the 45 nominees as it meant people were taking notice of his work and the research being undertaken at Victoria University.

“I guess it opens a lot of doors. It means people can see my research and what I do. They had a lot of applicants from top universities and it’s good to know where I am.

“It’s really good, not just to be the first Kiwi, but to come from a New Zealand university. A lot of [New Zealand] research doesn’t get noticed as much as the bigger universities [around the world].”

His work explores the chemistry of the main group elements from the periodic table and he was nominated for a paper, which described the isolation and characterisation of a bismuth (II) radical.

He hoped to become a post-doctoral research associate overseas and was exploring his options in the United Kingdom.

Photo by Victoria University of Wellington.