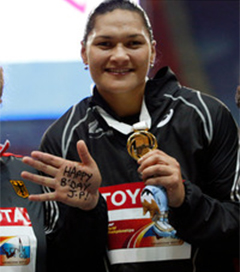 Adams, who is described as “the most dominant athlete in her event in world sport. Man or woman, track or field,” had five legal throws at the Luzhiki Stadium with four of them being further than any other female competitors’ throw, meaning any one of them would have won her gold.

While Adams’ winning throw was 2cm short of her season best, Adams was visibly thrilled with the win, wrapping the man who presented her with her medal in a bear-hug as she accepted the title. “It’s been a bit harder this year with injuries, even if it seemed calm from the outside looking in. A win’s a win, Adams explained. “Throwing more than 21m would have been great, but what the hell, I’ve got four of these [medals] now…. I’m just stoked.”