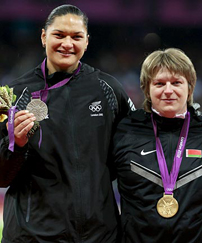 Valerie Adams has had her silver Olympic medal upgraded to gold after rival Nadzeya Ostapchuk of Belarus had failed a drug test. Ostapchuk’s disqualification means Adams is now the holder of back-to-back Olympic golds in addition to three world championship titles. While Adams is disappointed she didn’t get to accept the gold in front of her family at the London Olympic Games, she is grateful she is now able to say she achieved her Olympic goal. “It’s come a week later but it’s better than never coming,” Adams said. “Today is the end result and I won the gold for New Zealand and now it’s got six gold medals as opposed to five.” The decision means New Zealand moves up to 15th on the Olympic medal table with a total of six golds, two silvers and five bronzes.