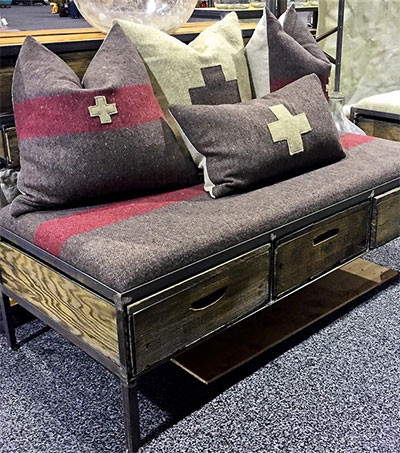 In the 1940s, battleship gray and army green were popular carpet and paint colours. Today those same hues are re-emerging with grey as a dominant neutral.

During the market, army green and khaki were evident in furnishings made from old military tents. United Strangers even used them to cover a console. The company also did a bedroll that doubled as a single mattress, ottoman or seat.

“I wanted to do furniture that had a story and would appeal to a younger demographic,” Komorowski said.

Komorowski said the core of his brand is products with a story behind them. He was designing for Halo and Restoration Hardware before branching out on his own.

“I loved the recycled look and thought about old army tents as a material,” he said.

The tents go through a four-stage washing process before they can be used as upholstery.

“We create a patchwork of the clean material and have three or four ladies constantly sewing it up,” he explained. All United Strangers pieces are done by hand.

Komorowski Designs, which is mainly concerned with designing and fabricating furniture, is headquartered in Guangzhou, China.

Komorowski is originally from Auckland.